If you're just starting out on your DIY journey, the first thing you might be wondering is where to even start with tools. Well, take it from me, a fellow amateur – you don't need that much! And many tools last a long time which means you don't necessarily have to buy them new either, the used market is great for tools.

Here are what I consider the 15 essential tools that I tend to use on my projects. They're not in any specific order, they're all essential! Get them all. Duh. 😁

These link out to search results because I am not reviewing these, just sharing what I've found useful for around-the-home projects! See our disclosure for how these help support the site.

I think this was my first tool purchase for myself, when I moved into the dorms in college. I didn't even own a screwdriver. So I went to Target and got this Black & Decker set. I am happy to report I have not needed to replace this set in about 15 years and I use it almost anytime I work on a project. I even have nearly all the bits still. Nearly. I would opt for a higher quality set now if I were to replace it, the ball bearing tends to fall out sometimes.

Another early purchase was a simple tape measure. I had a small one and then later upgraded. I recommend the kind that can stand up straight and are rigid for easier measurements. Some even have laser pointers, fancy! I have a separate laser measure so that might be a nice combo.

When hanging pictures, checking shelves, and measuring having a level is handy. Recently I went ahead and got a 72" level but for the longest time I made due with a simple 24" one and an even smaller one (useful for picture frames). Make sure it has a ruler built-in because I've often used it to measure on the walls between anchors or screw holes.

Bonus hack: I stopped putting nails in my wall awhile ago, now I use velcro command tape to hang things. Put the tape on the back of the frame, slap a level on top and press on the wall. Perfect, every time.

Nothing fancy. I think I have several extra hammers by now. Chances are without even thinking you have three. Want one of mine?

I currently have two, one cordless one from a Ryobi kit that fits 4" blades and my dad's old corded one which fits 7" blades. I'd definitely go with a 7" cordless one if I were choosing fresh as that seems more standard and cuts larger 2x4 boards better. If going cordless be sure to stick to one brand to keep batteries manageable.

The manual screwdriver above is handy but sometimes you need that extra power, especially for larger projects. The one I have is a cordless Ryobi but when it's time I'll be upgrading to a DeWALT version.

You'll need a drill bit set to go along with it! Oftentimes you can get them together in one kit.

I think for any serious project this tool is essential. A box level is handy but a laser level is critical to ensuring you're setting things up in a level way. The ones that sit on a tripod are the best. Wall-mounted ones work but usually end up putting holes in the wall to stay still.

A pencil? Yeah but not just any pencil! A grease pencil! Wipes away clean. I didn't know about these until last year. Useful for leaving a mark and then getting rid of it when you're finished.

Need to twist something with a lot of leverage? A wrench's got your back. I like the adjustable ones because they take up less room and even though I inherited my dad's 24-piece set, I don't seem to use it. 🤷‍♂️

Just as useful as a wrench, pliers are useful for pulling things like bent nails. Or teeth? Shudders.

Ah, the most versatile tool in the world. I grew up watching the Red Green Show. When I was a kid I thought it was literally "duck tape." If I'm being honest, I still pronounce it like that. Leaky faucet? Check. Rear bumper falling off? Fixed. Kid mouthing off? Tape that pie hole (🤐 don't do that).

Again, something super simple yet always useful. Great for just about anything. The ones that hold extra blades are pretty neat.

A stud finder identifies studs behind your wall for easier mounting. I was on the fence about this but decided to include it because I use it so often around the house when mounting things and I've had one for nearly 10 years now.

Super useful for cutting wood or making square marks. You can even hold it in place and use a circular saw to cut if you don't have a miter saw.

Where are you gonna put all these newfangled tools? In a tool box, of course! I'd get one that you can easily carry around. I had a tiny maroon one ever since high school and finally got a larger one to fit more tools. Then my dad gave me his stuff and I have way too many cases now.

Okay okay okay, I know I said 15 because that's a nice aesthetically-pleasing number but I think this deserves to be on the list especially if you are doing finishing projects like trim, baseboard, etc. It isn't quite essential day-to-day but for a DIYer, yeah, you need it. Get yourself a 10" chop (aka miter) saw. It doesn't have to be a fancy compound one, mine isn't, but it's nice to have one that is mobile and can be wheeled around.

ℹ By the way, I originally had no idea what "miter" meant – it's how you do the angled cuts on trim, when two angled cuts meet it's called a miter joint.

There you go, my essential tool list. Of course, if you're taking on a specific kind of project like drywall, framing, painting, etc. then there are other tools you'll need but this list covers all your basic needs for starting out doing small projects around the house.

A word about brands

I am not specifically recommending anything in this list but if I were to buy anything new, I'd buy DEWALT. I started out with Ryobi which is fine but you can tell the quality isn't quite there sometimes. DEWALT seems to be a good balance of quality and price. Plus, Jeff uses them almost exclusively. It's the truly frugal option, not the cheap option because you won't need to replace them hardly if ever.

I highly recommend leveraging Consumer Reports since they have exhaustive tests and are a non-profit, so they aren't being paid by anyone to say good things about their brand. Their buying guides are awesome. And remember, you probably have access through your local library.

You don't need a workshop, fancy saws, or any prohibitively expensive tools to start out. For $500 you can be set for most small projects. Once you take on larger projects then you can start collecting more gadgets (or even better, borrow them from a friend). 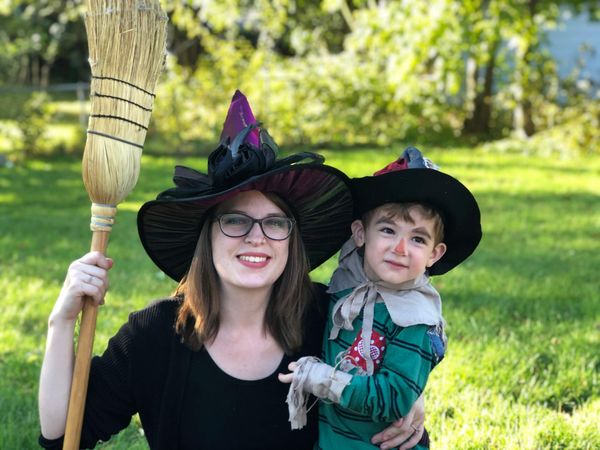 In part 2, Cassie explains how to put together a Witch and Tin-Man costume for our Wizard of Oz themed Halloween.